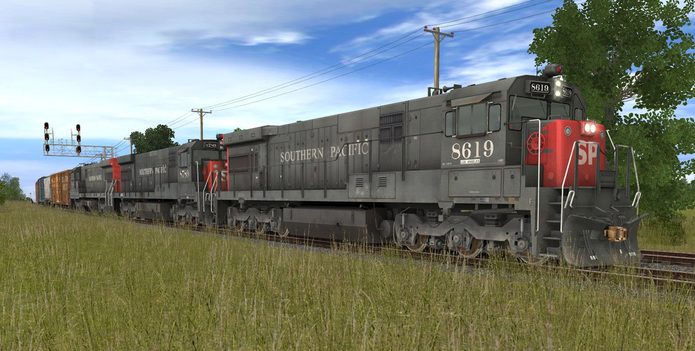 So, after a looooong (and somewhat) laborious process, my SP U33C's are finally out.  They can be downloaded here:

Many thanks to everyone who helped me out in the process of creating these, and to Joe Ramos and his group at RRMods for hosting them!

I hope that folks will enjoy these as much as I have had creating them!

Despite what appears to have been no recent progress, in the background much has been going on...

Funny story; over the Thanksgiving holiday I decided to release one of my U33C beta versions to the Trainz community (had a little wine, feelin' mellow... that sort of thing).  Packaged one up, put it up on my mediafire account, off it went.  It was pretty well received, but there was one comment that just got right under my skin.  Someone asked "Hey, could you try these colors?" And then they listed a set of RGB colors for the SP gray, red, and white.  Well, I've lived and breathed SP my whole life (see my Comments page for details on what I mean by that), and so it rankled me that someone would suggest that I wasn't using the right colors for my models.  Of all the nerve!  I stewed over it a bit, and then in correspondence with some folks about the whole thing, I got the most interesting replies...

"Yeah... been meaning to bring that up.  You really don't have the right colors..."
"You basically have them right, but you're probably going off digital images of pictures taken on color film stock from the 70's-80's, and there's the problem..."
"I didn't want to say anything, because I thought maybe it was my monitor, but they always looked kind of off..."

Long story short, for the past month I have been getting a crash course in what SP colors really are.  SP gray is actually called Lark Dark Gray.  SP red is SP Scarlet.  And SP white really isn't white (sans the SP letters or numbers on the front of the nose... yeah, it's complicated); it is actually call SP Lettering Gray. And... now for the humble pie moment; I did have the colors wrong.  SP Lark Dark Gray is much less purplish than what I was using.  As it has been described to me, it's more of a slate gray color.  Here, let me make it somewhat simple; these are links to color swatches that essentially show the true colors:

Now, there is still some disagreement as to what really constitutes Lark Dark Gray.  I have been told that the real paint color is darker than what many model paint companies formulated, but because people have become so used to it they assume that the color is 100% true to life, and that anyone who suggests otherwise is flat wrong.  Others say that is bunk; the paint formulas SP used were made available to companies like Floquil, Testors, and that they have them absolutely correct.  I'm not going to join in that fray.  I am, however, using the basic colors as indicated above as the base for my texture files, and then working up from that.  Follow along with discussions I have had, I am trying to take into account color changes due to UV weathering, soot accumulation, dirt wash (love that term... thank you Howard!), etc.  So I am not just using a flood of RGB 187,189,176, but subtle variations on that, with weathering, fading, etc. layered in.  And I have to admit; the models do look better for it.

What this means is that during all the time since I last posted anything I have been re-working each and every texture that I had started for all of the versions I have made so far.  We're talking approx. 80+ textures, not including the Adirondack trucks.   I'm still not done.  By now I truly expected to have this out in the game world, chugging along, spewing oil, and dragging freight.  But that was not to be.  But I am making progress, and I think the final product will be all the better for it.

Sometimes one needs to swallow ones pride and accept that ones preconceptions can be (and probably are) just flat wrong.  Things become  better once you've made that leap. 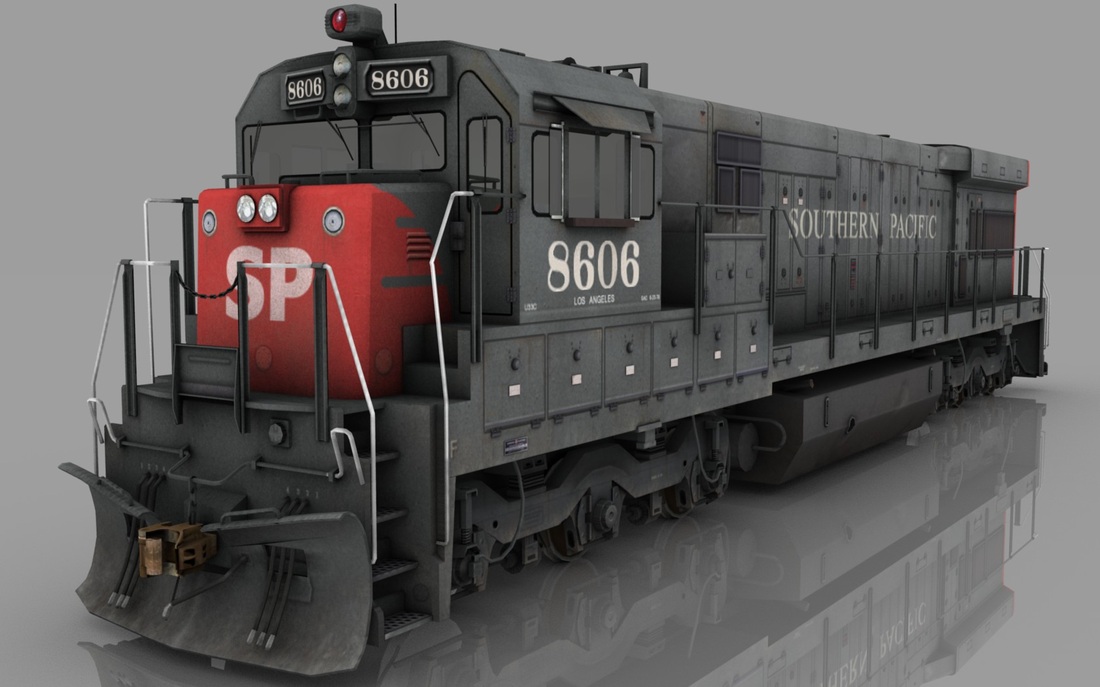 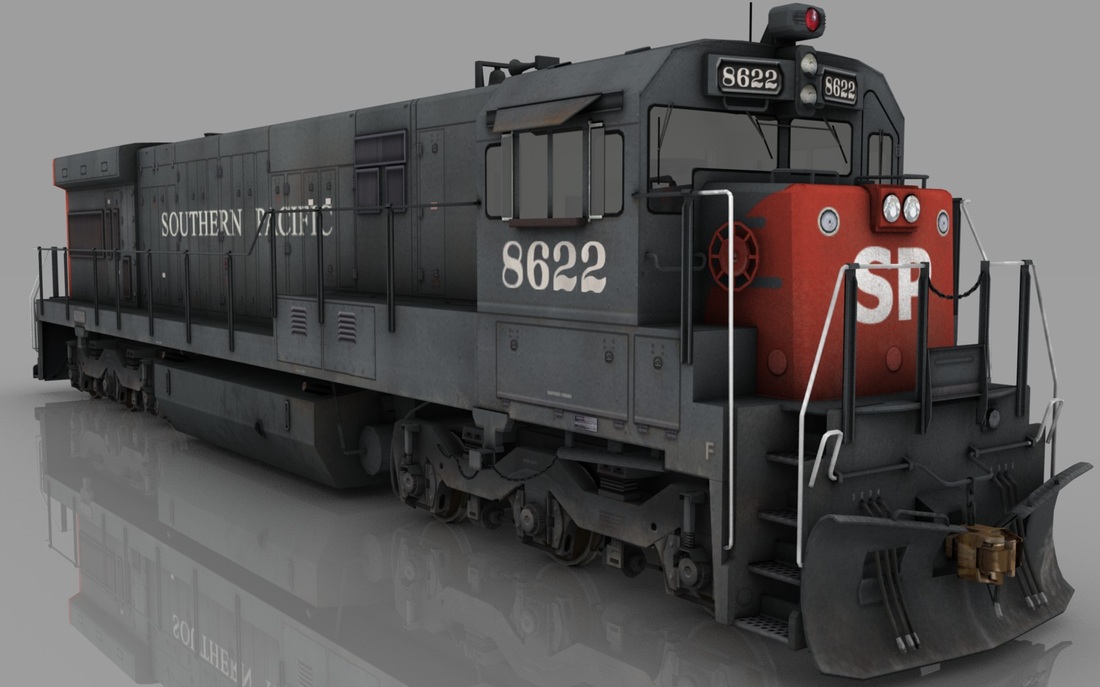 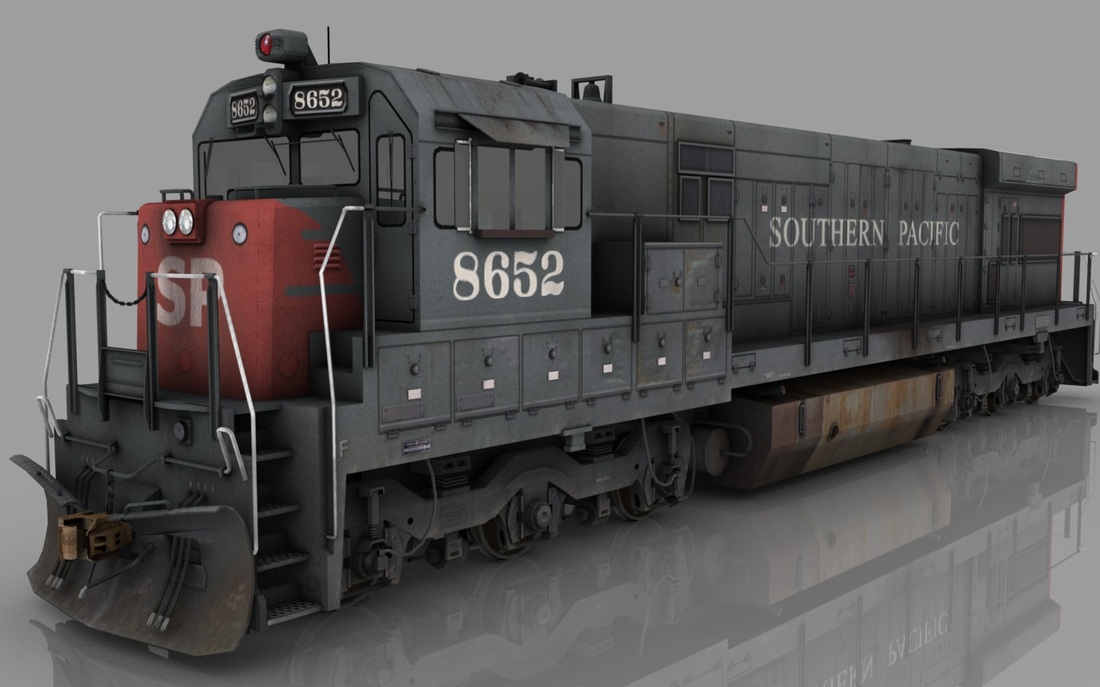 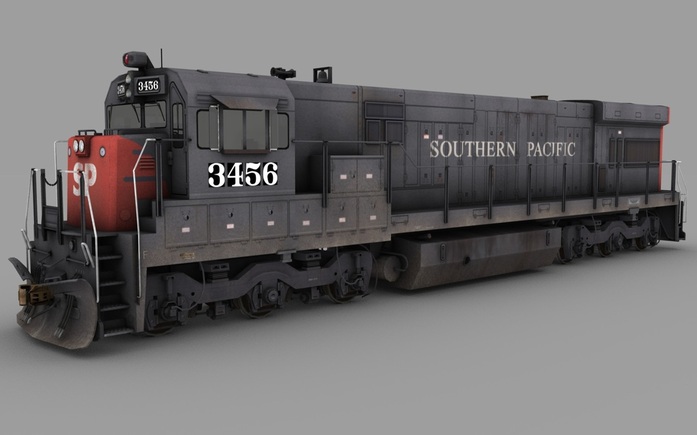 So, the SP U33C's are currently in the hands of the beta testers.  There are, as of this moment, 4 versions; I broke out the entire roster of SP U33C's  into groups by road numbers, and made a base version for each set.  The reason?  Well, the funky look of the numbers on the cab side and the number boards that you see in the pic above is because those are the digit planes, and these units now have NumberIt ARN (Automatic Running Numbers).  So, in essence, I have the complete SP U33C roster from 8585 to 8796.  I have one unit textured so it covers the 8689 to 8769 units which had the roman SP lettering on the nose.  I am quite happy that this was able to be incorporated with this model, and with the results.  If I could get Chameleon working with these to be able to switch the two main texture files... well that would just be the icing on the cake.

Still have one more road number set to work on; that is the 8600 to 8619 units (the phase IIa build), which had the tapered fairing going from the main body back to the radiator bulge.  But I have to add the mesh pc. to the model for that.
SP U33C WIP...

Well, progress continues on the U33C.  I have made a few slight changes to the mesh of both the U-boat & the Adirondack trucks to correct a problem one of the beta testers noticed with the sand pipes on the trucks fouling the air tanks.  I've got that sorted out, so now I am working on the LOD models, and tweaking a few things with the textures, etc.  I have been convinced, based upon the progress of the SW1500 cab, to do a custom cab for this unit.  Haven't really started on it just yet, but hopefully I can make some progress in that direction soon.

One thing that I was asked about; why such pronounced staining on the sides / walkways / fuel tanks on both sides of this unit?  In doing my research on U33C's, I have come across lots of comments that one of the big drawbacks to these units was that they had a mechanical flaw which allowed oil leaks to develop quiet frequently, and due to "human engineering" difficulties made by GE, correcting these leaks was a definite challenge.  Often they just went uncorrected until the shops were forced to do something, and this meant the units operated with oil leaking out of them like a sieve.  One article I read about them on the Santa Fe says that the operators there commonly referred to the U33C's as "oil pots".  Given the way the SP handled things, I understand now why so many of the proto shots I have seen show these units with oil streaks coming from all sorts of directions. 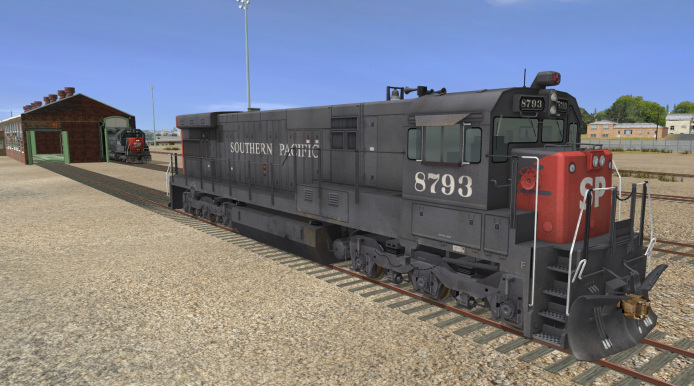 Well... here it is in game.  Even has the Adirondack trucks I made.  Still a lot of work to do, but nice to see it in game and running. 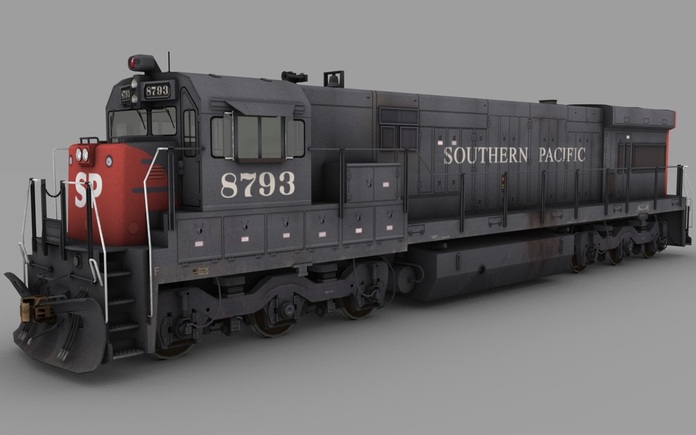 Worked some more recently on the  SP U33C . I think the texturing is coming along nicely.  It's still not 100% by any means, but it definitely has that SP vibe... 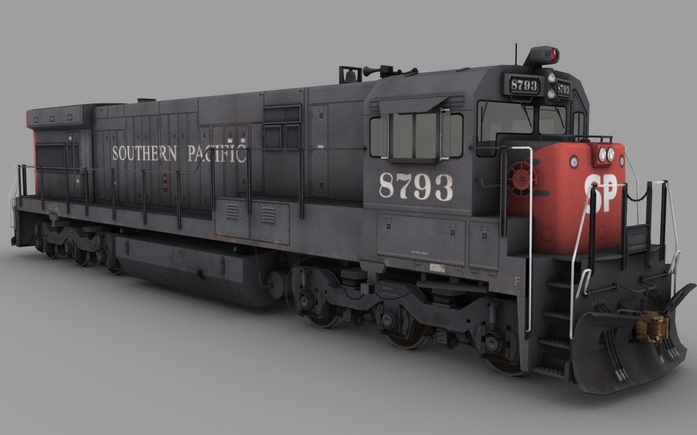 Some more progression on the texturing of the SP U33C.  Still haven't broken down yet and gotten it into the game.  All in due time, I suppose... 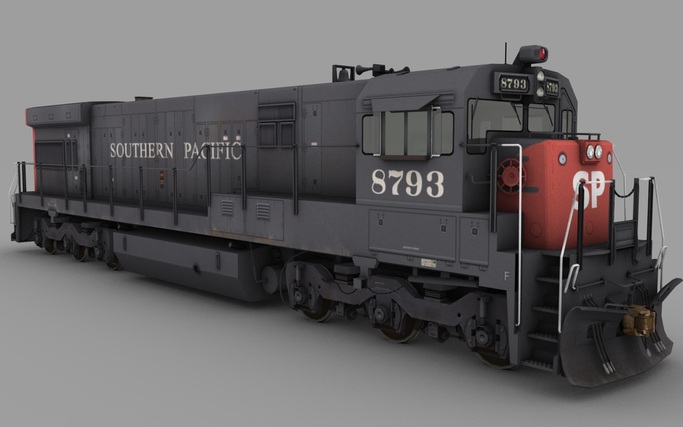 More texturing progress!  Starting to get some good ol' SP rust and grime in there.... 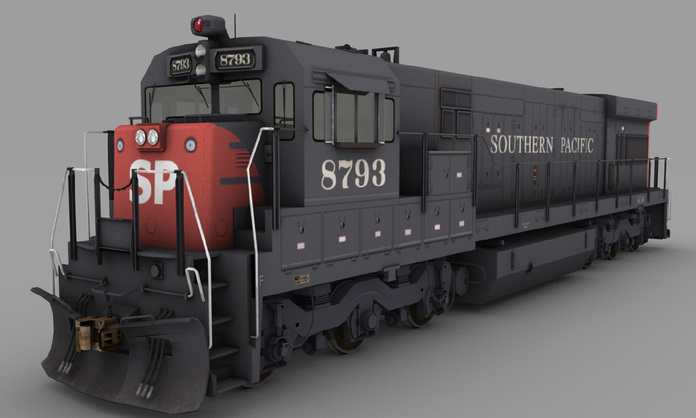 Texture progress being made!  At some point I am going to have to break down and actually get this in game to see how it looks, even if I don't have LOD or shadow models started... 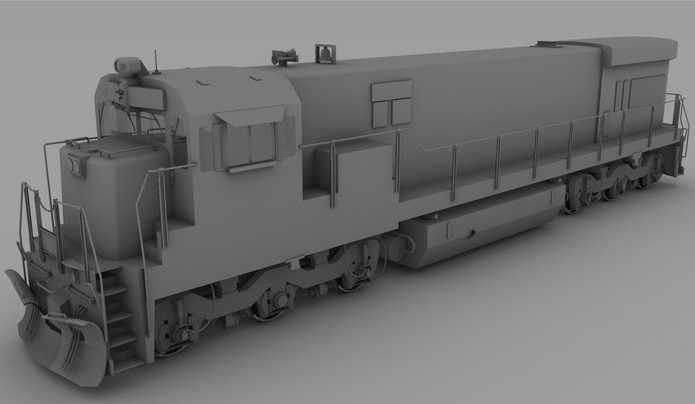 Well, the base model is done.  Now I just need to get started on the texture mapping and baking...
Proudly powered by Weebly